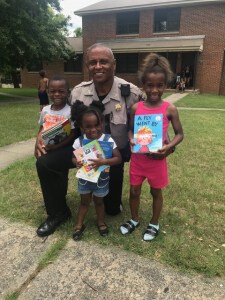 June has been a busy month for Book ‘Em. They delivered 100 books to The Mentor’s Project of Bibb County so that the 50 students taking part in their summer program could select two books to keep. They continued to supply books to the BCSO patrol headquarters downtown for patrol deputies to distribute. The Weekend Lunch Program for the homeless at Christ Episcopal Church also received 40 books to replenish their supply for children who come there for meals on weekends. 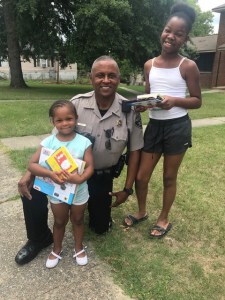 Thanks to a grant from The Linda Harriet Lane Fund, administered by The Community Foundation of Central Georgia, Macon Book ‘Em will be able to purchase close to 2,000 books specifically for patrol deputies to distribute while making rounds in Macon-Bibb. Book ‘Em went on a ride-along with BCSO Patrol Deputy Tommy Harris to kick off this effort. Deputy Harris spent two hours of his busy day taking us to search for children on the streets of Macon-Bibb. They visited Memorial Gym on Second Street. The kids participating in their summer program were on a field trip, so they moved on to East Macon. They visited the Family Investment Center and our friend, Rhonda Miller, whose Girl Scout Troop they delivered books to in 2018. While there, they were introduced to Roger Jackson, Executive Director of the Motivating Youth Foundation. 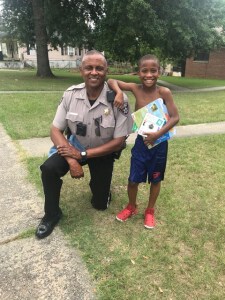 Mr. Jackson was busy preparing lunch for the 50 children/youth attending MOYO’s summer camp. They discussed planning a book distribution day with him later this summer as well. Deputy Harris spent time talking with some of the youth there and answering their questions about everything from doughnuts to tasers. From there, they went in search of unsuspecting children to “book.” As they drove through Davis Homes, they spotted a precious 3-year-old boy walking hand-in-hand with his dad. Deputy Harris pulled the BCSO cruiser alongside the duo. I rolled down the passenger side window and told them that they needed for them to stop so that they could get out and book them. At first, they were a bit taken aback, but as soon as they saw the basket full of new books they pulled out of the car, they were all smiles! I suspect that one little 3-year-old is enjoying his new set of six Marvel Superhero books that he took home with him. 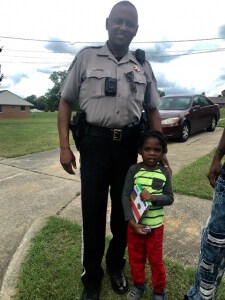 They also picked out a Doc McStuffin’s book for his baby sister. From there, they moved on to the Pleasant Hill Neighborhood. They spotted three young children on their front porch, escaping the heat. They were delighted to be “booked” with several classics including “The Cat in the Hat,” “Go Dog, Go.,” chapter books for the older sister, and board books for their baby brother. Several other children spotted us while they were “booking” and came over to be booked, themselves!