Macon, GA – July 31, 2009 –  Attorney and former Bibb County Prosecutor Jeff Powers recently finished fourteenth in his age group and seventy-seventh in his third Alcatraz Challenge Aquathlon & Swim on Saturday, July 12 in San Francisco, CA.  The event began with a one and a half mile swim beginning at Alcatraz and concluding at Crissy Beach, near the Presidio.  Following the swim participants tied on their running shoes and ran across the Golden Gate Bridge to Sausalito and back for a total of seven miles.  Last year Powers finished in one hour and forty-five minutes and placed 50th overall in the competition. 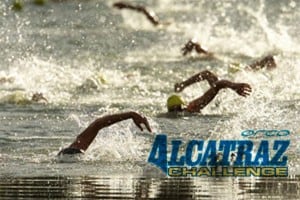 Powers has been competing in triathlon events since 1988 as a student at Florida State University but fell away from competing in the intervening years.  “I was just glad to finish that first race,” Powers remembers.

Training for events like the Alcatraz Challenge is a year round endeavor.  “I swim at Northside Pool with a group of Masters Swimmers three days a week.  I also bike with a group several days a week.  Right now I am focusing on swimming and running,” says Powers, “In May, I competed in the Coliseum Hospital Rock N Roll ½ Ironman Race finishing third in my division for the swim portion of the race.  That was my warm-up for Alcatraz.”

“Running across the Golden Gate Bridge is exhilarating!  The Bridge literally moves while you are running and the wind and fog are coming in off the San Francisco Bay as you run out towards Sausalito.  This year the water was much more turbulent and the bridge was really windy,” grins Powers.

Powers future competition goals include a ½ Ironman Race and maybe even a Full Ironman at some point in the future.  “It takes a lot of training so I will have to work up to it but I’m looking forward to the challenge,” says Powers.

The Alcatraz Challenge Aquathlon & Swim began in 1981 as the Escape From Alcatraz Triathlon.  The event has evolved over time dropping the bike event and becoming the Aquathlon it is today.  The venue allows racers to experience two of San Francisco’s pre-eminent landmarks – Alcatraz and the Golden Gate Bridge – up close and personal.  Visit www.alcatrazchallenge.us for more information about the event.